My Adventures in Brazil

So far my journey in brazil has been amazing, the people, the food, the culture and of course the volleyball. Even though I’ve been kept busy with training and matches, I’ve had a couple of opportunities to venture out and really see the country and the culture that Brazil has to offer.

Whether its been my trip to Paraguay to get my visa, checking out Cataratas do Iguaçu (the waterfalls intersecting Paraguay, Brazil and Argentina, the beach’s of Rio or the local Japanese festival, it’s been such an unique and amazing opportunity.

Here is a glimpse at some of my life here in Brazil through the lens of my go pro and many, many awkward shots of myself trying to figure out how the go pro works. Hope you enjoy it!

This past Thursday we got our first chance to leave the dome of Chico Neto Gymnasium as we traveled up north for two friendly matches. The first thing that caught my eye by surprise was our bus. Going into the trip we knew it was going to be a grueling 8 hours, which I know all about living in the south of Finland and making at least 5, 6 hour bus trips throughout the year. Fortunately for us, we had an amazing bus that had rows of seats, which could pull into beds as well. Our 8 hour trip, was essentially a decent night’s worth of sleep. We were able to stop for breakfast and I said my first taste of Açaí, native to the Brazil and the amazon (per 100 g of dry powder) packs 533.9 calories, 52.2 g carbohydrates, 8.1 g protein, and 32.5 g total fat. For a vegan, it’s a perfect kick start to my day and I only hope to make it a staple of my morning breakfast here.

We made it to the hotel, where we were given some time to nap, a quick lunch followed by more napping (if you’re a athlete on a road trip, you nap and then you’ll nap some more) so of course after lunch a little more napping and then we we’re off to face São Bernardo. Just like our gym, Chico Neto it was a dome and it was HUGE, so far it’s been a libero’s dream to compete in these gyms. Think Walter Pyramid ceiling, there’s no way your shanking a ball to the ceiling nor punting at that. Unlike our first friendly, this gym couldn’t be more empty and we were able to get after it right away. Just like Vivo/Minas, São Bernardo was able to dictate the match with their serve receive and defense, it didn’t matter who was defending, they refused to let anything touch the ground. We fought and we scrapped to a 2-2 finish, deciding recovery would take president over a 5th game. We shook  hands and to my surprise they had former All-American on their team, Pedro Azenha (Hawaii). We were able to catch up a little bit and throw around some mutual friends but just like everyone I’ve been able to meet here, he couldn’t of been nicer and wished me a warm and prosperous stay in his home country.

The next day we we’re up early, breakfast finished and on the bus, to get a morning lift with our team trainer, Flavio. I’ll try to speak eventually about the lifting culture here in Brazil but what I have learned is it’s a staple and foundation at least with our team. Back to the dome and we we’re able to get after it, just like a mentioned before, being a staple of our team, the guys don’t take any days off. Even if they aren’t feeling too fresh they still commit to their lift and it’s a pleasure to be apart of an environment with no excuses and no explanations, the guys here refuse to take days off and I know it’ll pay dividends throughout the season.

After weights, we we’re able to grab a nice bite and then it was nap time once again as everyone went back to their respective rooms for hibernation. Checkout time came at an extremely awkward time and left us in the hotel lobby for 2 hours to fiddle and for myself, Moomo and Renan, time to experiment with my Go-Pro, which you can see more of below. The time finally came to head out to the gym as we took on a younger 1st division team, São Caetano. It was clear that we had been marked on their schedule for quite some time as they competed with their lives on the line and took the first two sets. We we’re able to come back a take the next 2 with strong play from Thiago and Rennan but as the match concluded, we knew our presence of mind wasn’t acceptable and wouldn’t be when we open up the season in a week. Overall, it was great to get on the road with the guys, to bound a little bit and to see what still must be addressed before our opener next Saturday. Below is a little video documenting the week, after awhile I let some of the younger guys take control of the Go-Pro and what I got back was a lot of shots of the floor, sandals and the ceiling but with the power of editing I was able to put some clips together to show what it is like for life on the road. Vamos Moda Maringa Volei! 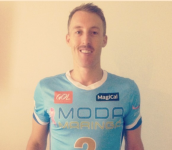