In 2004 I was the youngest player on the Olympic roster.  Playing along side some players that were legends of the sport made it surreal.  I don’t think the “Olympic” feeling really hit me until opening ceremonies.  Even now I feel that was the best part of being there.  From the moment we put on our opening ceremonies outfits, waiting for the bus, taking pictures with all the other US athletes to walking around out into the enormous stadium with all the flashes going off.  After that it was back to work and trying to be the best team there.  Another great moment of the 2004 Olympics was beating Greece in front of their home crowd in a sold out stadium.  We were losing the match 1-2 and down 20-12 in the 4th set.  We made a miraculous come from behind victory in that set and battled for a huge 3-2 win in the match.  The following day we were on the “Today Show” and it really felt like a special moment for all of us.

As for raising a child overseas this is my first go about it. The reason why we continue going abroad to play is because of all the free time and how much time I get to spend with Brett and Ford.  Living in Doha this season has actually been a blessing.  The hospitals are state of the art and everyone speaks English.  We feel very comfortable living there with Ford and its the first country (Out of 8) that has an “American” market.  We can get fresh fruits and a lot of other American products.  Its been really great not having to test a bunch of unknown products.  I know a lot of players need to stop playing abroad when their children start school but I would really love it if I was able to play in a country where my children could get a little foreign culture.  Like learning French or Italian at school.  At 33 I’m not sure if that is going to be possible. 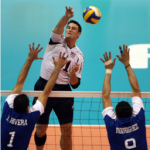 Brook Billings
Features on our blog