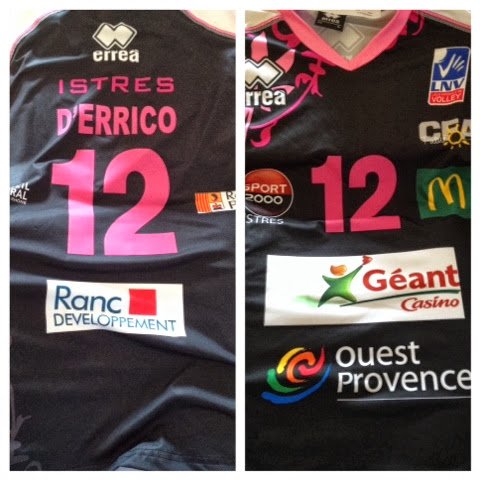 So Monday starts the preparations for the league Open Generali where all the teams come to Istres (12 in total) for the first match of the league.  There will be three matches on Friday and three on Saturday (including our premier match Saturday night at 730pm).  Now JP warned us this week we will be asked to volunteer our time promoting the match at different venues throughout the week as well as attending press conferences for the league director, mayor of Istres and a few other sport directors from our city. This week also has an interesting schedule for us because of the floor being put down, matches on Friday and other teams practicing in our gym.  So we have to head to FOS where basketball is to practice on Thursday and Friday but its luckily not that far and still a very nice gym.  Oh and the other exciting news for the week is Dana our last teammate arrives from Canada on Wednesday, the same day that Leslie has her check up appointment for her abdominal to see if she is cleared to play this weekend.

Sooo Monday the girls were asked to go to Geant (the grocery mall area near our gym and apartment complex) to hand out flyers.  I walked to meet up with them solely to make my weekly shopping trip and get a free ride back to the apartment complex (carrying sparkling water and groceries gets tiring after a long practice).  In the process I also got dragged into some pictures which was lovely after not showering yet haha.  I also missed my physio appointment but decided to go Tuesday instead.  Practice was just simply alright Monday, nothing that specifically stands out in my memory as different and new.  Serving and passing with fitness workouts as well.  Oh but I do remember working on loads of defense with Adu while the setters got reps.  Then we did serve receive at the end as well which was lots of reps too.  I love the pace of reps when its libero specific and plenty of balls in a row.
Tuesday morning was my favorite by far because I had to go help hand out flyers at the city market which is from 8-1 every Tuesday.  The market is a big circle on the Main Street of the city center and its got everything you can imagine.  Clothes, pastries, fruits, vegetables, rotisserie chickens, cheeses and more.  I included pictures below of all the streets we walked through.  Now again imagine Leslie Mari and I (non french speaking mostly but soon to change) walking around handing out flyers to the crowd.  People ask questions and I just keep walking trying not to seem rude but just pretend I can’t hear them haha.  The bad part of the morning was that a reporter came (this isn’t the bad part) and we had to get taped handing out papers to the people as well as stand by while she interviewed people.  However, it made is 15 minutes late to practice because she needed certain footage so we kept flyering until she said she had what she needed.  Bummer as most people know I stress out when I am late to things and I HATE it especially for team events.  If its appointments like dentist chiro etc I don’t so much mind haha. 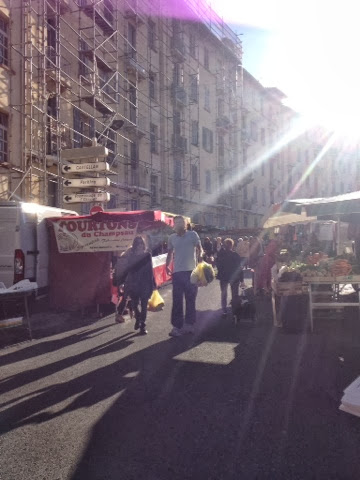 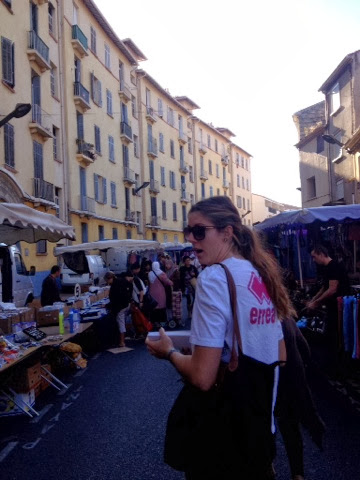 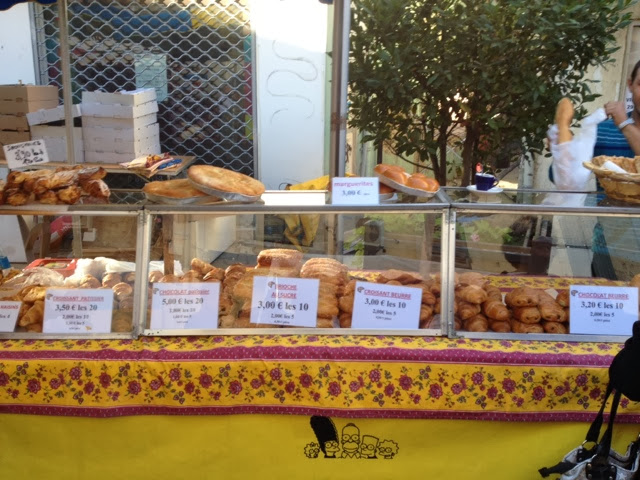 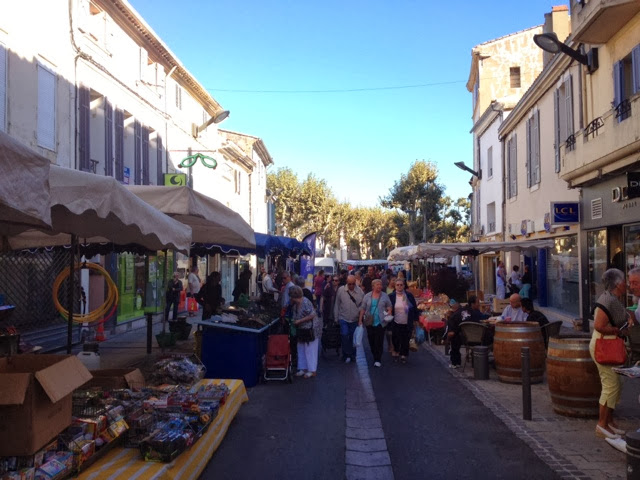 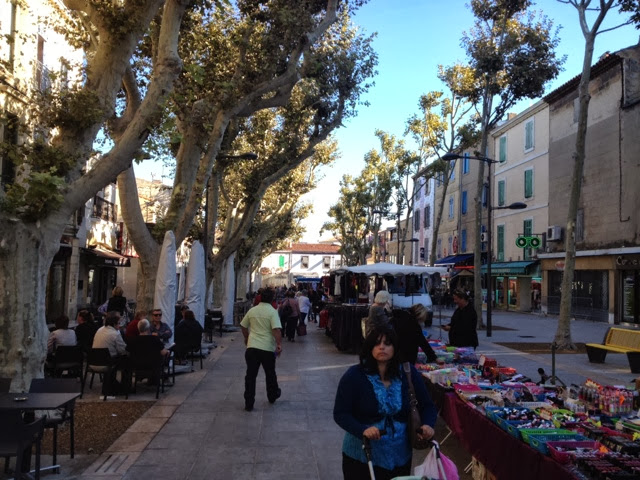 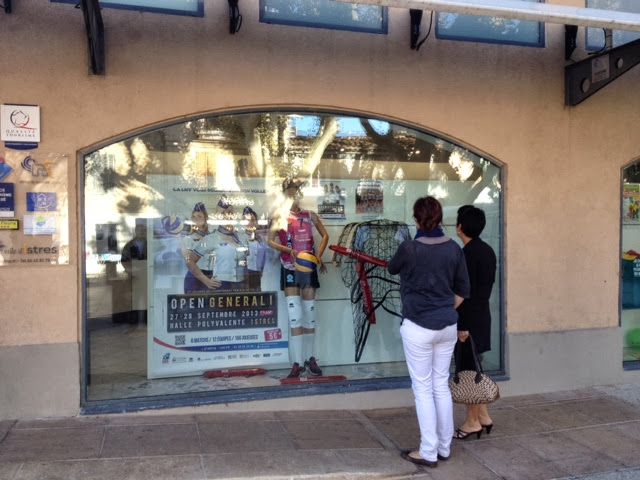 Now on to practice which was better as we started to do rotations serve receive wise to prepare for the match.  Sideout rotations, wash drills against other players and of course serve and serve receive.  I love the fitness/technical session separation from the regular practice because it gives us time to break things down, similar to individuals in spring at school and also team practices like the fall at college.  LOADS of serving and passing (the two most important parts of the game DUH)!!!!   I went to physio after practice with Leslie and got my back rubbed out as well as my knee for the week.  It is great having a place we can go whenever we need treatment so close to the gym.  Whirlpool with jets and all but the one thing they are missing that we all wish (at least those that played in the states) they had is a cold tub for our legs.  Tomorrow starts the weird practice schedule becasue we have to end at 2 so the crew can put the floor down after our practice finishes.

BUTTTT there was a fun surprise for us when we arrived in the morning for practice.  A larger than life size poster of Ivana that will hang from the rafters for the tournament.  Cecile told us that it cost 8,000 euros but I say there is no way and if it did thats ridiculous to pay that much for anything promotional that lasts for a weekend.  However, we all had the chance to lay on top of Ivana and pose for a picture just so you can see how large it really is in comparison to a person haha. 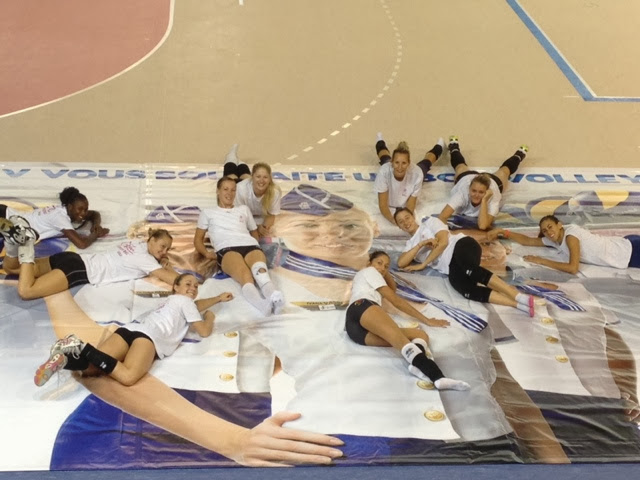 Practice afterwards went really well but fast seemingly and we ran out of time to fit in the extra passing reps we were supposed to have according to the schedule.  The BEST news of the day was received after I got home from the gym though…LESLIE GOT CLEARED TO PLAY ON SATURDAY!!!! Also Dana survived her trek from Canada and all of her doctors appointments in Marseille.

Later that night when they all finally arrived back in Istres I had coconut and almond meal crusted chicken ready for Dana as well as a vegetable mix with some garlic onions and shrimp.  Dana was appreciative after her long day for the yumminess.  Lent her a towel, helped her figure out how to unlock her door and sent her on her way.  So happy to have the last piece of the puzzle here.  Practice tomorrow isn’t until late so tonight sleeping nice and easy.

So Thursday, two days before our first official game of the league.  Practice was, how do I phrase this in the best way possible, UGLY hahaha.  All the anxiousness and nerves before the first match showed big time with our team play drill.  Defending the other team off of their serve receive and if we win that a free ball to our side that we had to win as well.  Ask me how many free balls went to target and my guess would be about 50%.  FREE BALLS and they were all over the place from everyone not just one person.  The simplest things and we were just so tight that it wasn’t going well.  Getting all the nerves out now though I guess thats a good thing.

Tomorrow practice is early morning three straight hours at FOS again and then we have to watch the 230 match St Cloud Paris vs Hainaut because next weekend we play at Paris.  Walking into the gym was one of those feelings I will remember for the rest of the season.  The stands, the decorations, the electronic boards, tv crews and teams warming up…all of a sudden made everything real.  I LOVED every second of it.  Chilling to think about how much I love this game and the chance to perform in front of a crowd of people regardless of where or when is what I love and live for.  I think its an addiction.  Especially when the group of people that surround me are all on the same page, commiitted and dedicated to the cause, that brings me even closer to the game on an emotional standpoint.  Check out the gym set up below for the matches we had to watch. 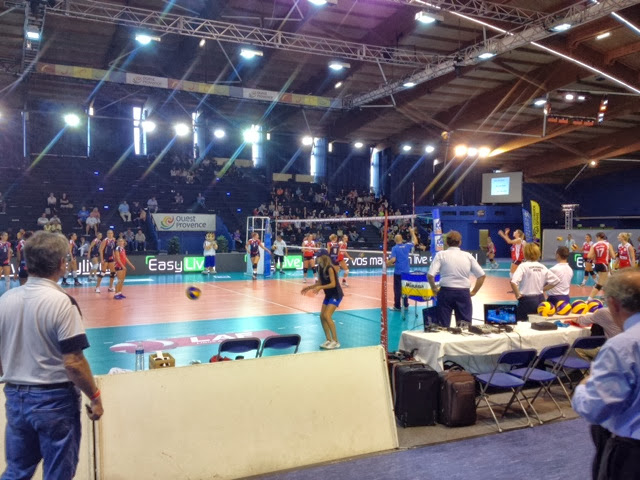 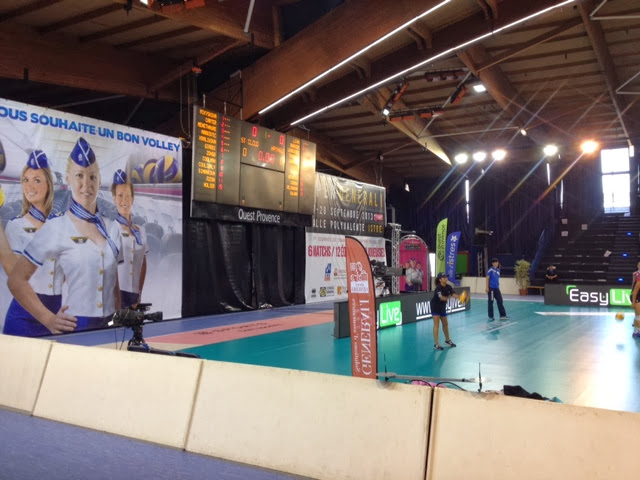 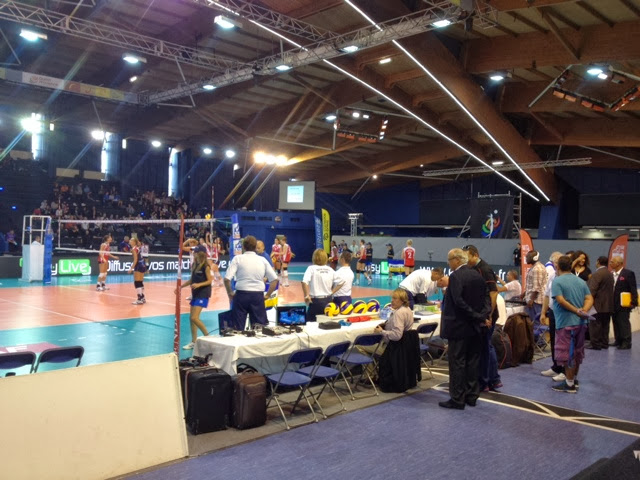 Onto GAMEDAY!!! The morning of our match we had to head to the gym early for a league photo shoot before our serve pass time.  It was hilarious, we took team pictures as well as individual shots with and without the ball. I am assuming its for later in the league to promote matches as well as playoffs down the road with the players that have been making their mark.  Here are a few below from my teammates as well as my personal shots haha, thanks to Leslie standing behind the camera guy and snagging a few for me. 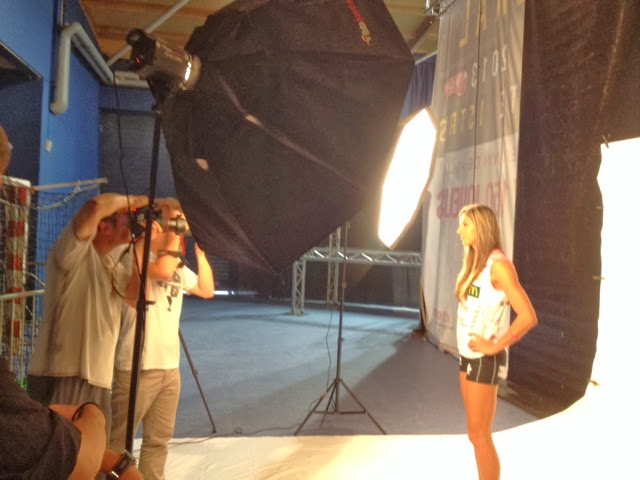 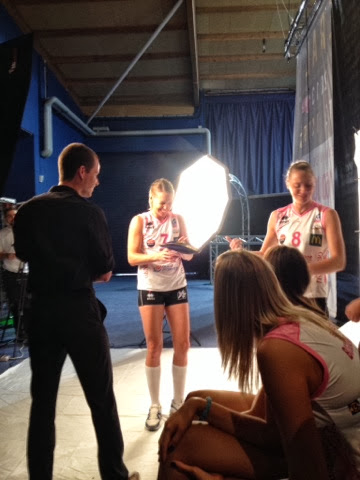 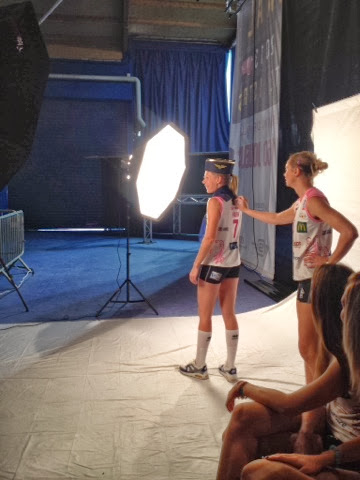 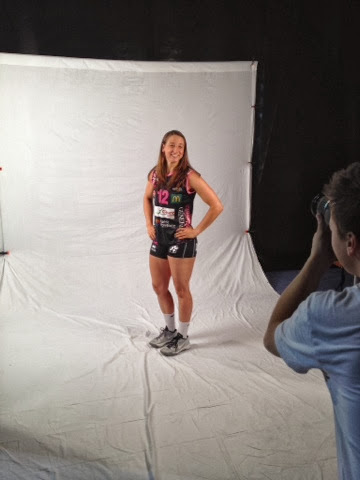 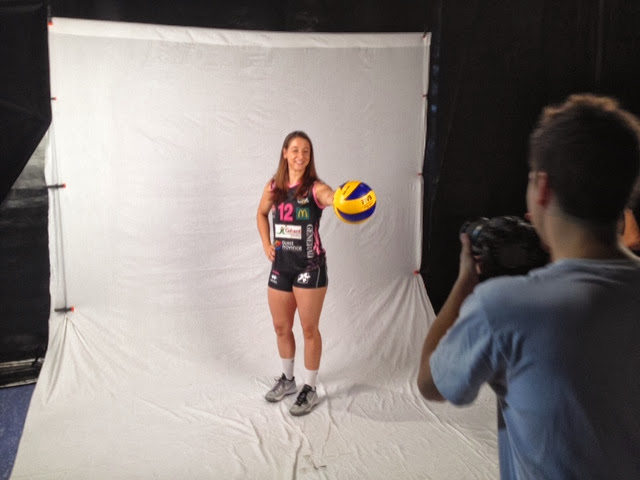 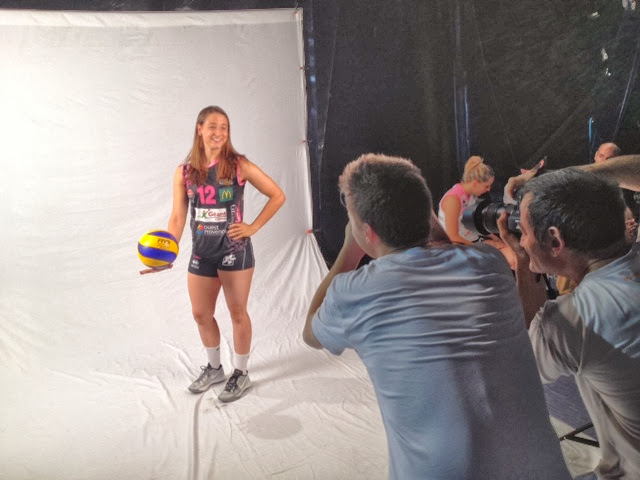 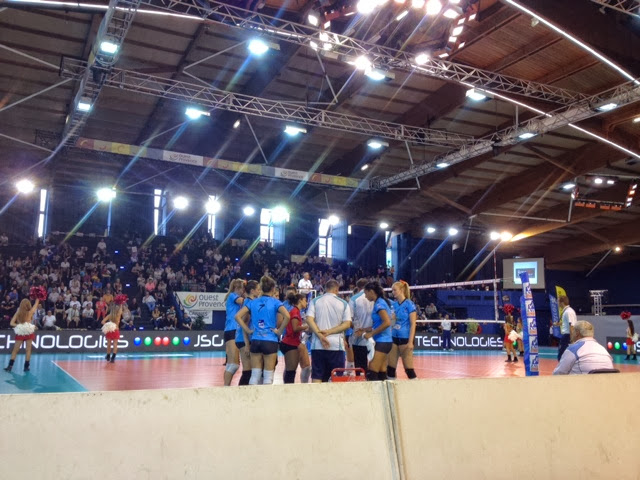 Serve pass went well with lots of fast paced reps squeezed into a short 45 minute time slot immediately followed by another team (very similar to NCAAs).  Afterwards we headed home for some food and rest.  Since the matches are all scheduled back to back we had to be at the gym for the start of the match before ours.  Based on what was happening in that match was how we based our warm up times in the other gym near our clubhouse offices.  It was interesting since the match went to five and we would start to get warm then get told oh its going to a fourth and then a fifth, and have to slow down our pace haha.

The match…so the first set we had the lead and somehow let it slip away at the end to lose 26-24.  The first set was full of plenty of ups and downs, big blocks and swings as well as mishaps between players and silly reception mistakes.  Second set we played much better and won 25-21 I believe and headed back to the other side for the third set hoping to go up 2-1.  Well thats exactly what happened and we took the match lead with a tight set, closed out in large part thanks to our stellar front court blocking.  Did I mention that we were playing against a team that had Alex Jupiter on it who formerly played at USC (same years I did so two final four appearances).  Always fun seeing former top team foes in the league which there are plenty to mention here in France.  Fourth set we battled back and forth back and forth all set until the end where we closed the gap to 23-23.  They sided out and had set point and we were back in serve receive and managed to get aced on a ball that the bottom dropped out of on the endline, bummer but we had plenty of other opportunites before that ball to go ahead and close out the set.  Sooooo into a fifth we go, no better way to start the season than a dramatic five set thriller back and forth battle. The fifth set was less of a competition in large part thanks to Ivanas serving in the beginning.  I believe we started out with a 6-1 lead and they never had a chance to come back.  We rolled from there and won 15-9 I believe.  The sweetest part which the newcomers were unaware of was Le Cannet was the team that knocked us out of the playoffs last year, revenge is sweeter at home!!

After the match we headed across the parking lot to a place called Magic Mirrors which we soon found out was a restaurant area for parties (we always wondered when we walked by it everyday what it was).  There were small tapas for all the boosters and club volunteers as well as players.  It was delicious with seafood, chicken, fresh cut prosciutto and drinks.  Yummy in my tummy after a long hard fought victory that ended at 10pm.  Pictures of the post party are below as well as a few of the weeks meals! 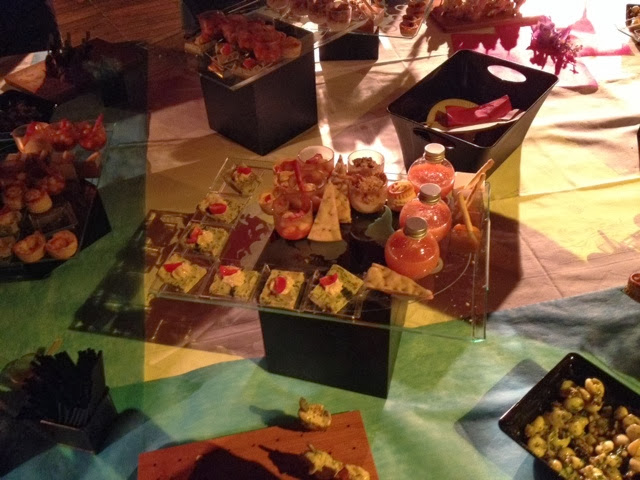 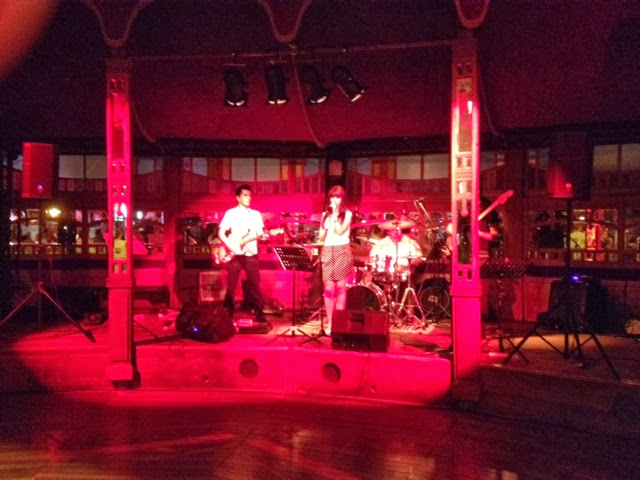 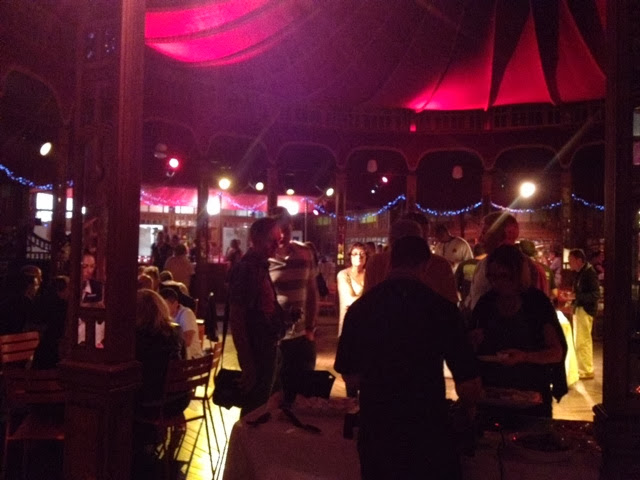 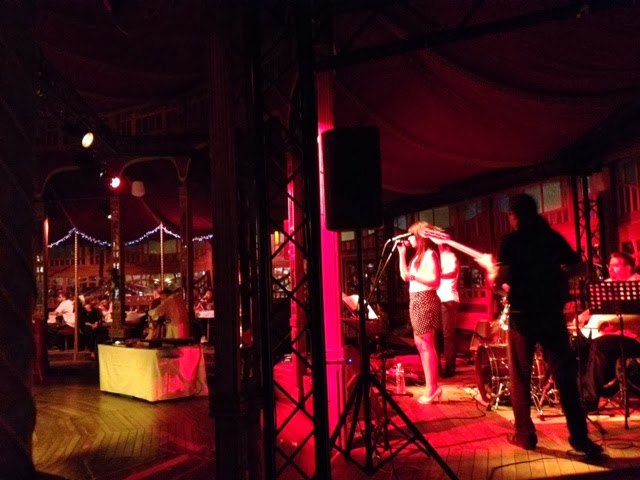 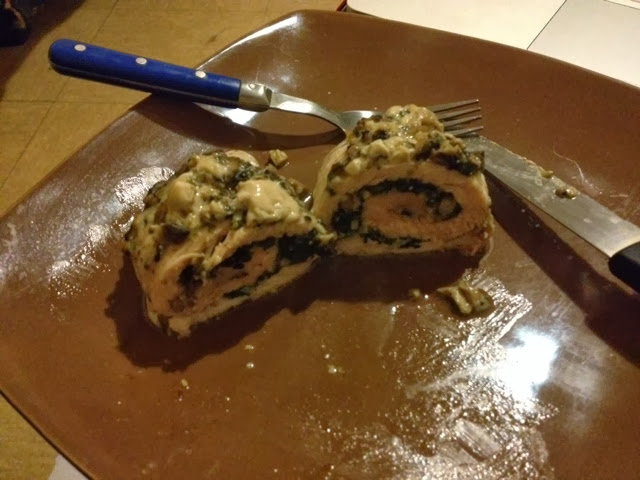 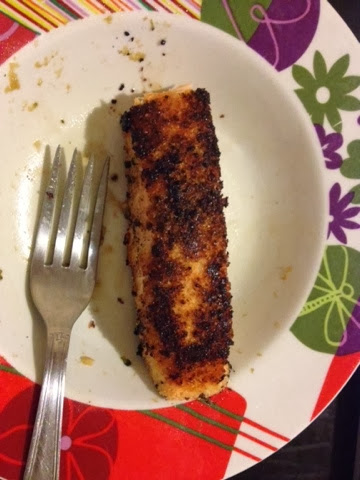 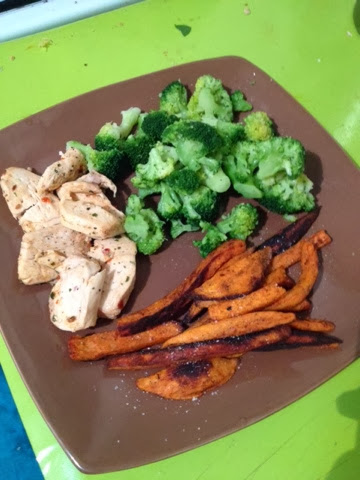 Until next week when we head to Paris 🙂 so excited