Many people have been asking for an update on the injury I sustained last week, so I decided to write a little piece on my last few days! Sorry it took so long, but I had to wait until my finger was healed enough to type…A quick warning, some of this blog may be a little graphic so if you don’t have a high tolerance for things of this nature, consider yourself warned.

Something strange happened to me on the morning of last Wednesday. I was making eggs and burnt my finger a little bit on the frying pan. As I finished cooking, every time I tried to flip the eggs the frying pan would spin, and I remember thinking how frustrating it would be to do some normal tasks for somebody who only had one hand or arm. Well, life has a funny way of working itself out and I got my own taste of just how hard it would be later that day.

During training that night I was blocking and the ball hit my finger at a weird angle. This typically happens once or more times a practice so I did what I always do; grab my finger(s) in pain. But I remember it felt weird, so I looked down and to my disgust I saw red and white…a lot of it. I started walking towards the exit saying I need to get my stuff and go to the hospital, but my teammates were telling me I needed to pull it into place immediately. That is, until I showed them and watched their faces turn. They couldn’t get me out the door quick enough. I took an old sock from my bag and wrapped it up as soon as I could, but had to take a look. I saw bone, blood, and piece of flesh that resembled my finger and appeared to be barely hanging on. I’m not exaggerating when I say I honestly thought I would lose my finger that night. 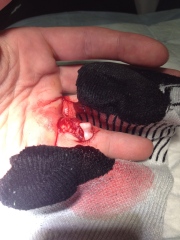 Sorry if this is disgusting, but you can fully see the damage done…yes, that is a bone

My assistant coach Jerome and I headed out as fast as we could, and he told me we were going to a specialty hand hospital 20 minutes away, which I’m beyond lucky is so close to us. Once there, we waited about 20 minutes for an x-ray (see picture). We saw a doctor soon after, who made me take it out of the sock bandage and tried to put it back in. At this point, my body’s natural pain-killing reaction had worn off and I was in a lot of pain. The doctor, unable to put the knuckle (2nd knuckle on my fifth finger on the left hand) injected some local anesthetic and after 5 minutes put it in place. They then put some dressing on it, and I asked why they weren’t stitching it up…”You are going to stay the night,” Jerome told me. He was grinning, so I thought he was joking. He was just smiling because he was thinking, “that sucks for you…” Thanks Jerome.

I was brought to my room on the second floor, and was impressed with the quality of this place! The hospital was relatively new and I had a fairly large room to myself. It was about 10:30 at this point, and was not allowed to eat or drink past midnight. I also knew I wouldn’t sleep much, didn’t have a computer or book, and my phone was near dead. That, coupled with only francophone nurses and TV and my limited French, forecasted a bad night in the hospital for me. At this point, I was honestly feeling alone and nervous. I’ve never had surgery or stayed in a hospital, and I didn’t have any idea how I was going to pass the time that night. The distance to my family and the language barrier were greater than ever before.

However a teammate of mine kindly brought a phone charger and the best McDonald’s I’ve ever enjoyed, and I was able to spend most of the night talking to friends and family (one of the first times I’ve been happy there is a 9 hour time difference

). I also spoke with the two graveyard shift nurses for quite some time, who were very kind and wanted to come see the next home game.

The first X-ray before it was corrected

At 6 am the nurses came and gave me more meds and told me the surgeon was here, and preparation started. I took a shower, waited a bit and was wheeled down to the surgery waiting area. Before leaving, the nurses gave me their names and I made sure I would get them tickets for the game the next day. A doctor injected a healthy dose of something into my arm, and told me to wait 5 minutes. After what seemed like 5 minutes, I wasn’t sure if it was working until another nurse came. She was injecting some antibiotics into my other arm and I lifted my arm to help roll up my sleeve and almost slapped her in the face. I had no control of the muscles in my arm at this point, and not much sleep in me, so the next bit is a blur…but at least I had my finger

When they were ready, they wheeled me into the next room and it was clear this was the operating room. Another doctor was sterilizing my arm, and a few nurses were standing around talking to me, trying out their middle school-level English. At one point I was trying to say something and they doubled over laughing. I’m pretty sure I conjugated it wrong and said something bad. Even the doctor cleaning my arm had to stop to laugh.

Eventually they placed a blanket over me at an angle so that I couldn’t see the surgery, which I was more than happy for. There was a radio playing the entire time, and I heard Avicii’s “Wake Me Up” on a whole new level. At one point I heard a power drill start up and that rattled me a bit (it sounded like I was in a Jiffy Lube), but I never felt any pain at any point.

How it has looked for the past week

After about 30 minutes of pulling, cutting, drilling, and stitching, they were done. The surgeon explained to me what he had done, with the help of Google Translate on his phone. Essentially they repaired the capsule around my knuckle and modified it (to ensure I would have full range of motion in the future), repaired the tendon and I believe he said created an artificial ligament to prevent my finger hyperextending this way in the future. Apparently some nerve work was done so that I would have full feeling in my finger. Right now, I only have about 10% feeling in that finger. It feels like when you have a bad burn on your finger and can’t feel much, but through my entire finger. It’s weird.

I was brought to my room and fell asleep pretty quickly after. When I woke up around noon, the painkillers had worn off and I devoured whatever pills the nurse gave me. I was in searing pain, and I couldn’t wait for Jerome to come to bring me home. At about 1:30 I was free to go, and went straight to the doctor. At this point I was feeling nauseous, hungry, and exhausted, so I just laid on the doctor’s bed while he conversed with Jerome. Finally he said to me that I would have a nurse coming to my house every 2 days to change the bandages, and asked me the only question he asked me that day… “Blonde or brunette?”

We went to the pharmacy to pick up the prescription items (totalling over 140€ or $190~), and we went home. I slept a few hours then went to  training to see the guys. It was great to be with them, but I was really sad to miss the game the next day. The surgeons, doctors, nurses, and kiné have all given me different timelines, but all have said a minimum of 6 weeks without play and some have said as much as 3 months for this type of injury. This will mean missing the rest of the regular season, and likely playoffs depending on how far we make it/my recovery.

This has been really hard for me to deal with, for several reasons. I personally had a good season, and was improving every day in the gym. The team has climbed in the standings almost every game since Christmas, and is currently poised to make a huge playoff run as we are in 4th place, and I was excited to be a part of that. I also don’t know what this means for my potential summer with the national team, and I have really been looking forward to competing to get another chance to represent my country this summer. That being said, there are definitely some silver linings to this cloud. I am getting  great treatment here (physio 5x/week, nurse house calls every 2 days, weights 5x a week with our trainer acting as my personal trainer), and I will get some time to rest my other injuries and come back fresher and stronger than ever, whether it’s for a summer with the national team or for another year of playing professionally here in Europe in September. 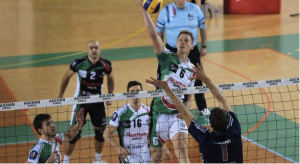 As for right now, I am simply focused on recovering and completing every-day tasks that have gotten exponentially harder. What are those tasks? Well showering is annoying as I have to use a bag and can only soap up with one hand. Cooking, cutting vegetables, and washing dishes is very difficult, which is why I bought paper plates

. Opening jars, putting clothes on, and typing are also very difficult, but I have found little tricks for each. It’s such a stupid and frustrating injury…how much do you use your pinky anyway? I’m a big guy, and this is such a tiny injury, but I have to give it respect or I won’t make a full recovery.

Injuries are always difficult to deal with, but I believe that ones true character is shown when they are faced with adversity. I see this as an opportunity to come back stronger, faster, and better than ever.