So I know it has been a while since I have written but things start to get crazy when matches pick up, travel is abundant and visitors start appearing.  However all of these things are the best part of playing overseas so I intend to share plenty with my followers in this entry.  It may be long and tedious but it entails the glorious city of Paris mixed in with a 3-0 sweep, a visitor from the #VFXNation family all the way in France, a loss to a champions league team at home in straight (ugly) sets and a (should not have happened) loss in four sets to a top 4 team at home again…oh and wait did I forget to mention my visitor from the states Christa crashing at my place for the next three weeks of the season.   Ok so to start the trip to Paris…we took the fast train on Friday, after a long week of practice it was nice to get to the train station and know we had spacious seating for the 3.5 hour ride.  The train travels at about 200 mph though so it makes a lengthy trip not so hard to endure especially for those who have to play in a volleyball match the following day.  Leading up to the travel we watched at least four hours of video on the opposing team to prepare not to mention the two more hours we spent in our hotel lobby watching more video of them.  This trip was a much needed reminder of just how much I missed home at the moment.  We stayed in a Best Western Hotel and had a starbucks within a block of us which means I had my very first Pumpkin Spice latte of the fall, talk about feeling like home. 🙂 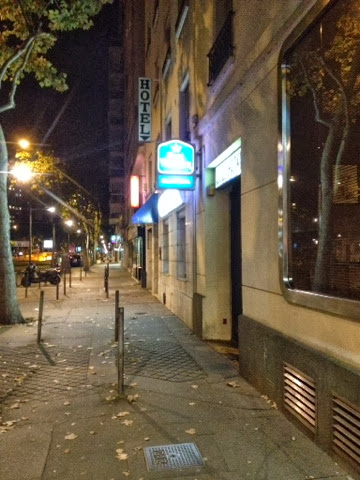 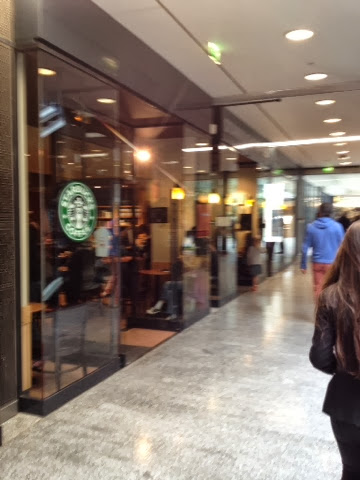 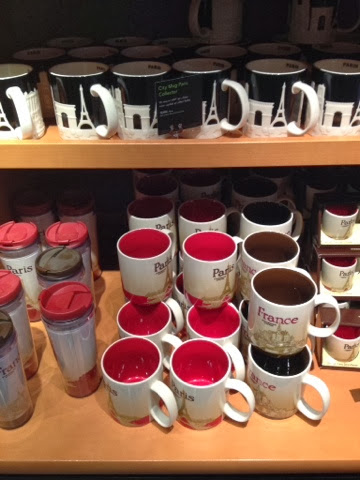 So our trip from Istres to Paris was quite entertaining.  My ticket had Leslie’s name on it which brought me back to the Belgium trip when Leslie had her middle name listed as her last name for our flight ticket and was not allowed to board the flight.  Ending with her and JP training to Belgium together and missing the first set of our match…hence why I had nightmares of myself not getting on the train but it all worked out.  Next little mishap was Leslie and I boarding the wrong car of the train and trying to tell a french lady that she was in our seat when in fact we had the wrong voiture (car) all along.  So we got off and reboarded in the correct car and found our seats.  They are spacious and have trays to place your things on as well as work space for those business travelers.  Leslie luckily downloaded Hocus Pocus and I was spoiled sitting there watching a Halloween movie amidst the oncoming fall weather.

After the train was the metro and traveling with our big team duffle was entertaining as we all tried to squeeze through the turnstyles.  This led to plenty of our players taking the family lanes with the sliding doors, however coincidentally those doors close faster then to be expected.  Loads of us got stuck and then the person behind would use their ticket to open the gates again and try to run through proceeding to get stuck.  Picture a group of TALL women in the busiest city in France at rush hour times on a Friday trying to maneuver with all the angry french business people surrounding us. 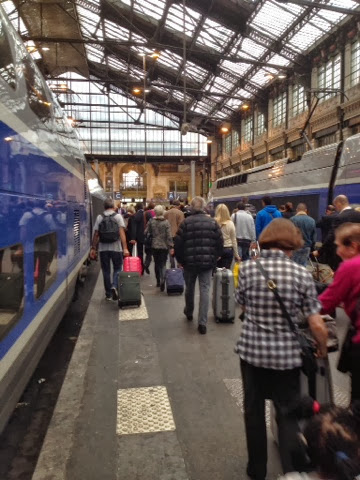 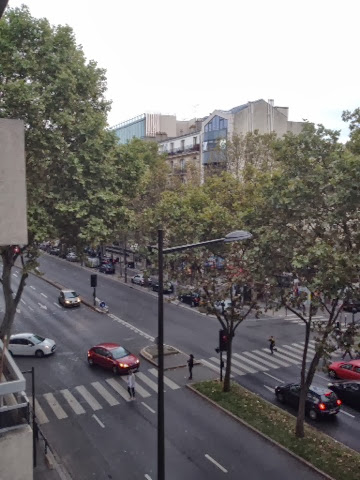 The next blip of the travel was totally my fault and very typical of myself while hilariously entertaining for the entire team. So imagine me..jampacked on the metro like a sardine with my luggage in hand.  I decided to sit on my luggage leaned up against the side of the train to try and give myself some breathing room.  However there was barely anything to hold on to and with the speed of the metro along with the crowd packed in there I needed to stabilize myself.  Well I found this little handle that seemed adequate for holding on to in these situations and when people started to clear out at the next station I pulled on the handle to allow myself to stand up and create some more space.  What I had not realized the entire time was that I was holding on to the emergency brake for the train.  When I yanked on it to stand up something popped and the entire train shut down. Luckily we were already stopped at a station so the doors just froze open and everything else stood still.  It was like I had created my own personal pause button for all the surrounding inanimate objects yet the people were still functioning. Afterwards I realized what I had done and told one of my french teammates right before the conductor came searching for the emergency.  I apologized like any idiot american would and tried to explain it was an accident while she used her tool to release the brake so we could continue on.  The best part of it all was the round of applause that I got from my teammates as well as a few other entertained travelers.  Obviously there were a few disgruntled riders as well that did not find the accidental stunt so entertaining.

The night that we arrived in Paris we got settled into the hotel and then proceeded to a yummy french dinner around the corner from our hotel.  Options were chicken or fish with vegetables and rice along with a creme brulee for dessert.  The fish was amazing and had some sort of puree sauce drizzled over it which paired incredibly with the bed of rice that was below.  Of course you can’t leave out the fresh bread that was brought to the table beforehand.  Afterwards there was dessert of course and why not try my first taste of cremé brulée ever….pause for suspense AMAZING but very small as the petite french style. 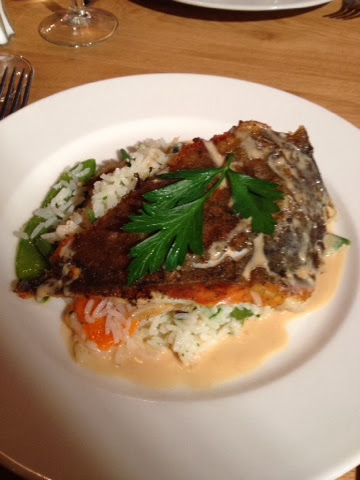 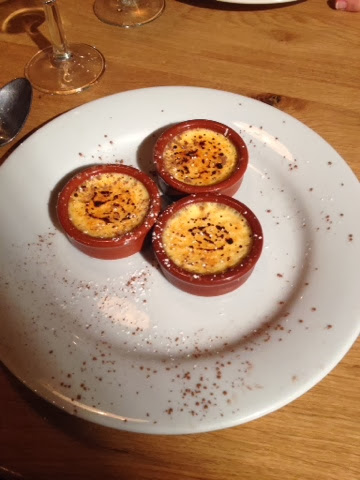 After dinner we had more video and then bedtime.  Leslie and I watched some TV shows in our hotel room before crashing hard.  Team breakfast was at 8 the next morning as we had to leave for the pregame practice by metro afterwards.  Typical european breakfast with loads of bread, jams, meats and cheeses, some yogurt options, croissants (mini guys with raisins or chocolate inside and then the regular ones), and cereals, oh and wait we can’t forget the strong strong strong euro style coffee.   Practice was quick one hour long and then back to the hotel for lunch at a different restaurant down the street from our best western.  We had chicken, pasta, vegetables with a olive, olive oil, potato salad and bread for our appetizer.  Tarte du pomme was for dessert or for those beginners in french apple tart. Did I mention that this week was the first week of french lessons for us…..that’s for a later date though because similar to the metro fiasco with the emergency brake you will laugh very hard at my french lesson experiences with the rest of the foreigners on our team. That is the soccer stadium in Paris which is right next to where we played our match (Mari is in the picture crossing the bridge).

Anyways another cool thing that happened this weekend was catching up with a VolleyFX alumni who just happens to be an au pair in Paris for the year.  Lexie Hartnett made it to my match, stayed for our teams post game meal and then toured with us to the Eiffel Tower for pictures and souvenir shopping before meeting up with her friends.  She might even start playing for a team in Paris a couple days a week after I had one of my teammates talk to the St Cloud Paris coach.  Unreal how small this large world can feel sometimes and how lucky I am to have that support from afar. 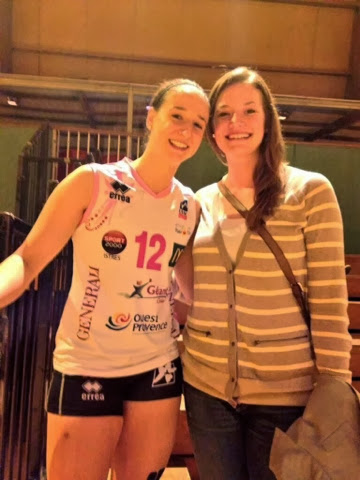 For those that did not follow the match we won 3-0 at Paris which is a great standard for our team to set within the league as they play in the European Cup.  The meal afterwards was awesome, catered within the gym for all the Paris players, boosters, coaches etc as well as our team and staff.  Salad, chicken, vegetables, mashed potatoes (very starchy typical European style I would say) but delicious needless to say because the chicken was on skewers like kebabs.

Now on to the Eiffel Tower….we had to run back to the hotel to change and grab Leslie’s camera before jumping back on the metro to site see the most beautiful piece of architechture in the world.  I will ask for you to excuse me before hand but I took a bajillion pictures of it from every distance, angle or view possible.  I turned the corner from the metro stop and saw the lights and was nearly left breathless.  So the pictures go in order from furthest (aka first view) to closer until we are right underneath the massive landscape.  There was no better feeling than the sweep victory on top of view standing before my very own eyes.  I had to stop and ask Lexie along with the rest of my teammates “Do you ever stop and think, is this my life?”  I am amazed with every passing day that I am so fortunate to experience days like this solely thanks to the sport I fell in love with as a child. 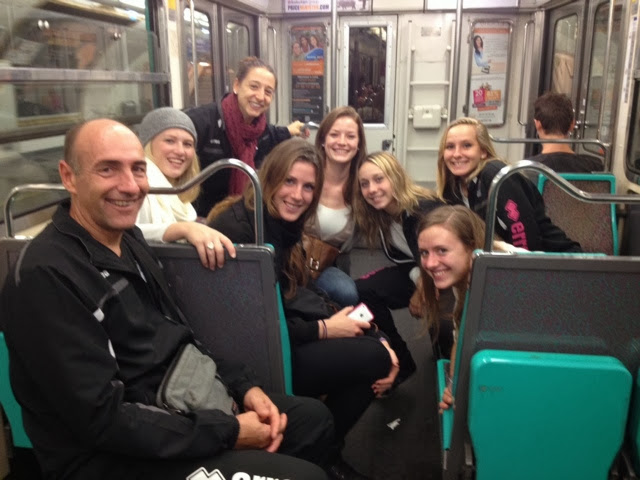 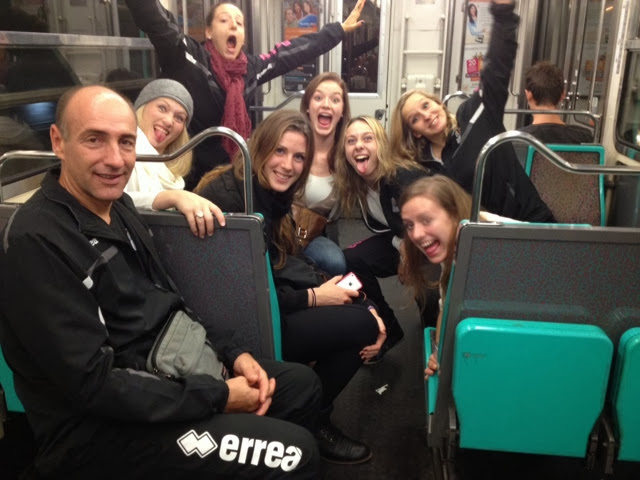 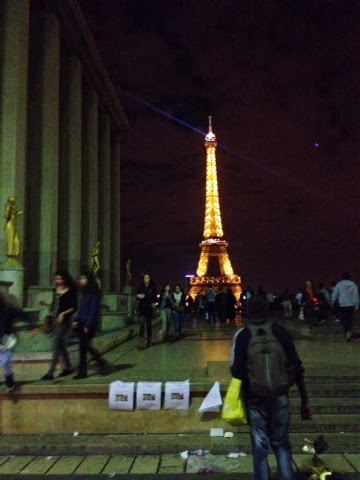 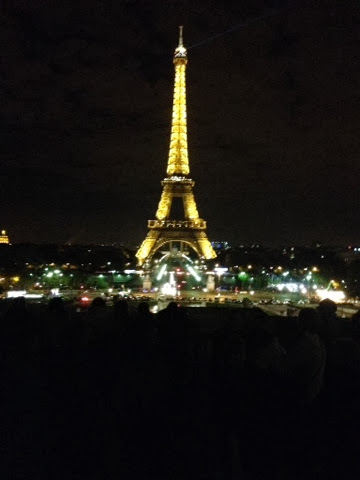 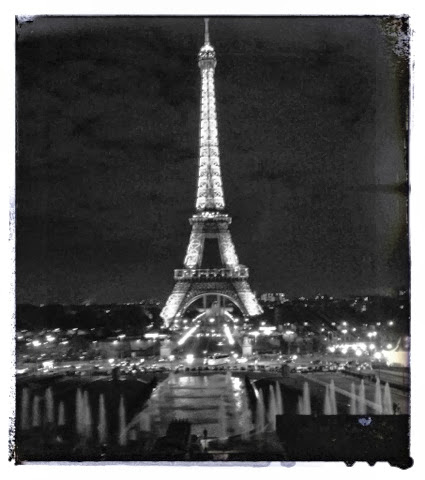 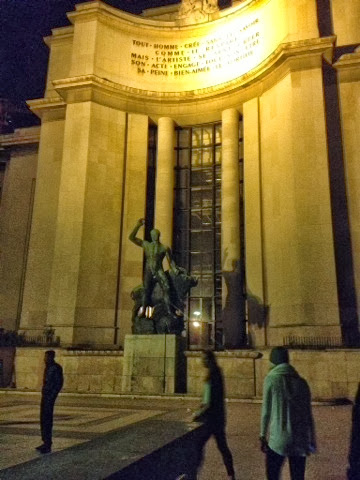 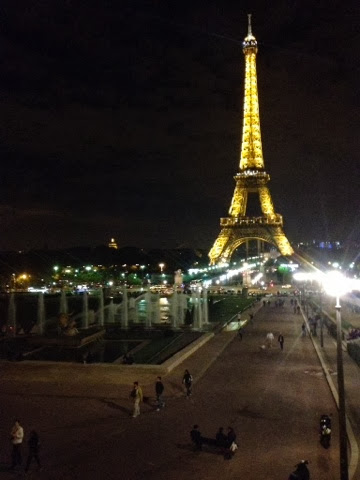 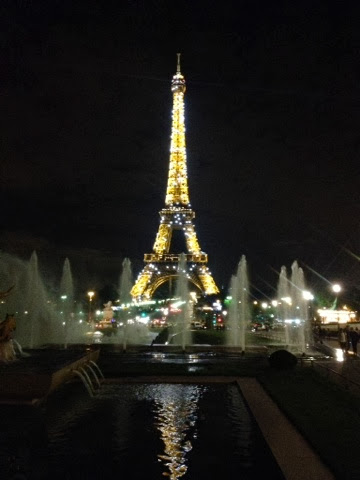 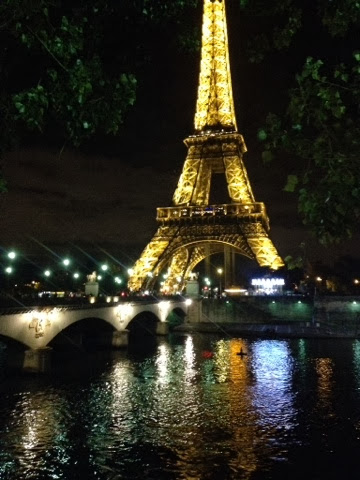 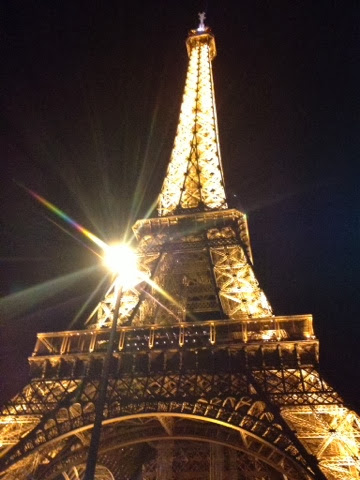 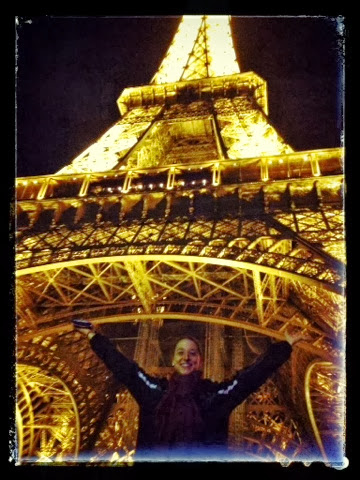 Incredible beyond my wildest dreams….I wish the blog would let me upload videos because if I could you would see the video of the light show that happens at midnight every night.  Someday I will eat a meal in the Eifeel Tower restaurant and pay to go to the top where you can feel the wind move the tower back and forth (just like the sears tower in Chicago that I was forunate enough to venture to the top of two summers ago).   Anyways the train back the next day was lots of sleeping as was much of the entire day….exhausting travel weekend for sure but feels better knowing it was a W in the books.  Back to the grind on Monday for Berziers (Poulette’s previous team and second place last year…aka a Champions League team).  Sorry that my blog is somewhat behind but there has been so many entertaining things that I have just fallen behind in the pictures and attempts to make these entries entertaining on all accounts. Here are a few other pictures from the week 🙂 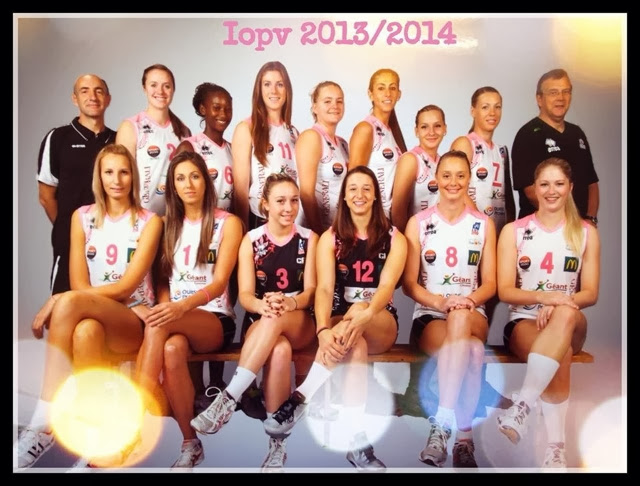 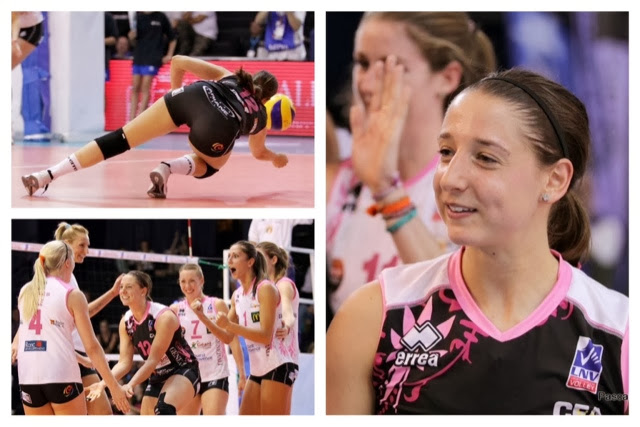 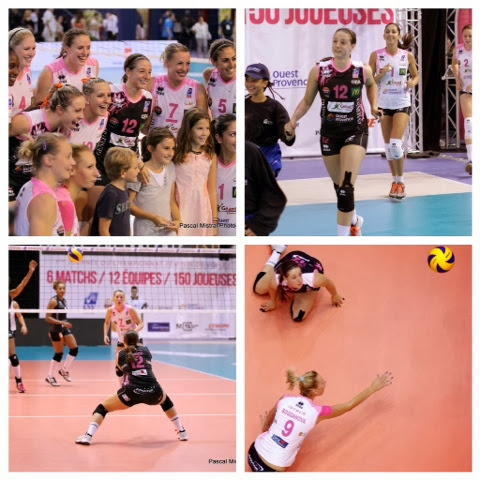 These are pictures from the first weekends matches but I figured they were worthy of posting for people to see some action shots throughout the season…thanks to Pascal Mistral who follows our team everywhere and takes great pictures along the way 🙂 you can find him on facebook as well for others. Anyways that’s all for not folks I know I owe you for Berziers as well as Mulhouse but they are coming, promise.