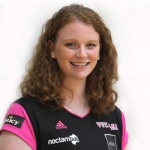 Katie Slay
Spotted: Katie In France
Features on our blog

It has been a great week so far here in Dresden. I have been staying busy with weight lifting, volleyball, and exploring. This past weekend we ventured out across the bridge to the new city. Also, my fellow Americans and I had a fun morning out walking around the city for a media shoot mid-week.  As always, quirky stories and pictures are to follow.

Thanks to a restaurant recommendation from Molly Krecklow, who played here last year, we got ourselves across the river to the “Neustadt” which is the newer city of Dresden. It is filled with restaurants that have cuisines from all over the world, lots of cool bars and bier gartens, cute boutiques and young people galore. On Friday night there was a fun energy in the new city, and we had a great time wandering around the cobble stone streets. We would walk down random alleys, and while I know this sounds like it might be unsafe, I assure you it was not. The alleys would lead to cute hideaways that had shops and outdoor restaurant seating under canopy lights. It was like stepping into a different place just for a moment. We found our way to a cute ice cream shop where I got my hands on a scoop of hazelnut ice cream in a waffle cone. The perfect treat to end the week of training. 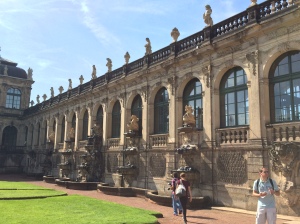 On Saturday we found our way back to the new city for some shopping and to get toBeyond the Pond which is an American and British food store. The lady who owns it is originally from America and is married to a German man. Unfortunately for us, this is the last week that the store will be open. However, we turned this negative in to a positive when we learned that everything in the store was half off! It was like Black Friday in there. I got my hands on some great essentials that I will use when making dinner for Thanksgiving like cream of mushroom soup for the green bean casserole! She also had Betty Crocker cake mixes. While I didn’t end up getting a cake mix, I couldn’t resist buying a tub of the buttercream icing. You just never know when that is going to come in handy. Also, I joyously purchased a normal-size jar of Skippy Peanut Butter! Moment of silence for everyone who has played overseas and hasn’t been able to find any. Europeans don’t yet understand how satisfying a spoonful of PB is after a long day. Is (peanut) butter a carb? 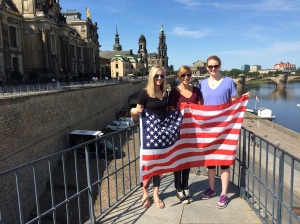 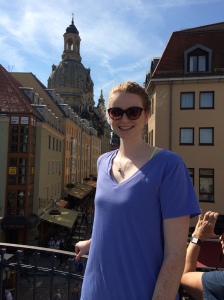 On Wednesday of this week Gina, Whitney, and I were told to meet up with the newspaper journalist and the photographer at one of the Starbucks shops in the main city. This was fine with us because we had, of course, already scouted out this location in the weeks prior. When Gina and I walked in to order a tea and coffee we heard a man speaking perfect English, with a southern accent to boot! He was hidden around a little corner, and Gina and I positioned ourselves behind a bookshelf to peak around to get a better look at him. We stood there staring at this talking man right up until we realized we were being super creepy. It’s just that when you’re thousands of miles away from home, and you hear someone that sounds like home, you take a second to soak that in. Naturally, we played it cool and proceeded to the counter to place our orders. 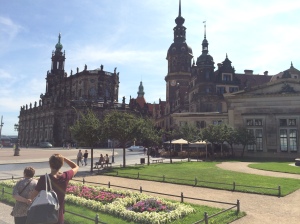 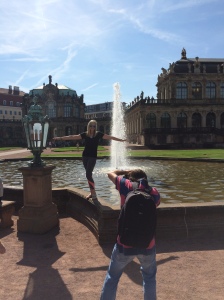 The reporter and the photographer were nice guys and seemed excited to show us around Dresden. We went to a large enclosed area that the former King had built for his wife so she could ride her horse around when she felt like being leisurely. Let me tell you, this was no stable like you might imagine. It was an area laid out with intricate grounds-work including fountains and buildings showcasing porcelain clock bells that chime at the top of the hour. The photographer liked taking pictures of me taking pictures for my blog. I personally enjoyed when they made Whitney stand on the edge of the fountain and pose with her arms up in the air. They kept yelling at her “Just like Celine Dion!” haha. We didn’t ask questions…we just went with it. Although, I think they were trying to reference the Titanic. For the record, Celine has nothing on you, Whitney! 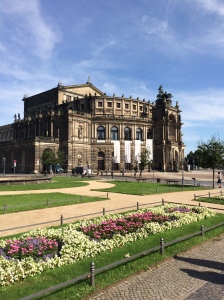 All in all, it was a beautiful day exploring around the city. We could not have asked for better weather, and it was a fun break from the usual routine of the volleyball week. Here’s to hoping that everyone finds a little something to make them happy this week! If all else fails, eat a spoonful of peanut butter!